Three lunch pictures today. Remember me telling you that Army Man wanted fancy lunches, too? Well, he's got one. It's hardly a lunch I'd assume belonged to an Army Man, but there you have it. 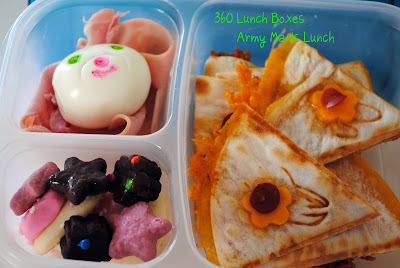 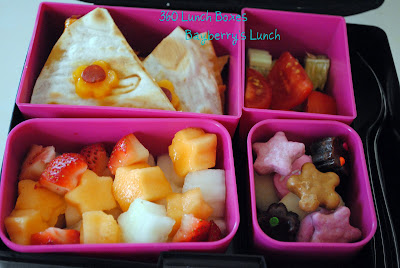 Bayberry has the same quesadilla; cucumbers and tomatoes; cookies and brownie bits, and fruit (Crenshaw and cantaloupe and strawberries, all cut into stars). She's taking apple cider to drink. 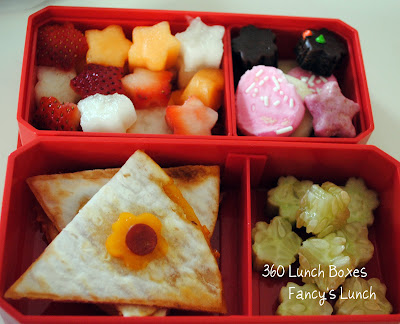 Fancy has the same lunch as Bayberry aside from no tomatoes. She's taking drinkable yogurt (see if your stores carry Lucky Layla Farms drinkable yogurt. It's real stuff, rather than those colorful kid-marketed yogurt drinks).
***There was lots of "waste" in making today's lunch, which is why I had a couple of bowls beside me while cutting things. I just handed each kid a bowl of scraps and called it snack time. They devoured everything. Another option for fruit "waste" is to add it to tomorrow's breakfast smoothie.
Posted by Michelle at 1:05 PM